"Teachers, let me tell you, are born deceivers of the lowest sort, since what they want from life is impossible--time-freed, existential youth forever. It commits them to terrible deceptions and departures from the truth. And literature, being lasting, is their ticket.
Everything about the place was meant to be lasting--life no less than the bricks in the library and the books of literature, especially when seen through the keyhole of their incumbent themes: eternal returns, the domination of man by the machine, the continuing saga of choosing middling life over zesty death, on and on to a wormy stupor. Real mystery--the very reason to read (and certainly write) any book--was to them a thing to dismantle, distill and mine out into rubble they could tyrannize into sorry but more permanent explanations; monuments to themselves, in other words. In my view all teachers should be required to stop teaching at age thirty-two and not allowed to resume until they're sixty-five, so that they can live their lives, not teach them away--live lives full of ambiguity and transience and regret and wonder, be asked to explain nothing in public until very near the end when they can't do anything else.
Explaining is where we all get into trouble."

Richard Ford, The Sportswriter, 1986. I kind of hate the book and its writing style and its whiny-ness, but there are some good passages.
Posted by Adrienne at 12:02 PM

Evan, hopefully you’re not worrying Paris with the later Yeats; but if the vacation has found café-front time for further reading, you’ve no doubt found that the “king of the cats”* follows that obsession with age for his entire long lifetime. The verses he deliberately set at the end of his collected poems, “The Circus Animals’ Desertion” and “Politics,” are both self-elegizing and a cyclical cosmic way of calling “do-over.” Take a look also at the many later poems that reflect on the accomplishments of Yeats and the Republic’s youth, in particular “Under Ben Bulben,” with its enjoinder,

Sing whatever is well made,

Scorn the sort now growing up

All out of shape from toe to top,

Their unremembering hearts and heads

Base-born products of base beds.

Which, for poets writing in Yeats’s wake (esp. Irish poets), can either sound like a job description by the boss or like an old man shaking his fist at the kids playing on the damn lawn. And “Politics” never quite settles for me into being entirely saccharine or entirely poignant:

And maybe what they say is true

Of war and war’s alarms,

But O that I were young again

And held her in my arms.

(I’d be interested to hear if/how you think the place of sentimentality shifts throughout his career.)

I’m fascinated by this question of age too, especially insofar as late nights spent reading for generals will slowly blind me and the approaching exam will pull out my increasingly wispy hair, such that y’all can expect the full emergence of “Old Greg,” slouching toward McCosh Hall, sometime around the first week of September. But while I’m still chipper and spry, I’ll say this:

Your wonderful phrase “voluntary senility,” though especially apt given Yeats’s occasional tone of patrician weariness and creaking joints, sounds to me too much like he’s giving in to age, rather than forcefully claiming it in the face of broader cultural infantilization. It may be of use here to think of the imperative Irish literary nationalists faced around the turn of the century to forge an indigenous and rooted tradition – that is, to imagine the nation and its folk as both new-born and old with Gaelic tradition. Within that cultural fund are important precursors to the modernist age fetish, such as the allegorical Kathleen ni Houlihan (as in Yeats and Lady Gregory’s 1902 play) who appears as an old woman begging sacrifice of young Irish men, and who turns young and beautiful when they vow their love and lives.

The bardic voice might be the Romantic counterpoint to the “youth-cult” you mention, since Blake is a particular grandpappy to keep in mind for Yeats. For Yeats, there’s a willingness and a desire to make of himself a relic while, as you say, asking his rhythm to test ideas and words til they become old in the way polished stones in creeks are old. (I’ll have more to say on this topic of rhythm, but will wait until I’ve re-read the poems again. The use of repetition to tune words comes into Geoffrey Hill’s definition of a poem’s “perfect pitch” and his ideas about poetry’s civic responsibility to/in language). That is all to say that there is a future tense to Yeats’s past tense -- which gets to the famous, occasionally derided repetition in the determined first line of “The Lake Isle of Innisfree”: “I will arise and go now, and go to Innisfree.” Or the apocalyptic perfect rhyme at the center of “The Second Coming”: “Surely some revelation is at hand/ Surely the Second Coming is at hand.”

But if Eliot follows these geriatric gestures, do you think he does so in the same way? Has he internalized it in some way, 'psychologized' it (to be waaay too quick with that word)? And, since Adrienne mentioned The Public Burning, do y’all think old greybeard Uncle Sam is in any way comparable to Kathleen in the nation-as-beckoning-old-person figuration? Both somewhat menacing figures in their respective calls to arms.

Anyway, this is a very quick reply, and one that is not yet informed by Official Generals Reading, since I’m still finishing up some writing. My plan is to start with Thomas Hardy and, on my Irish list, with Douglas Hyde (to get at some of these issues of cultural nationalism and aging, in his Love Songs of Connacht, 1893, and his pamphlet “The Necessity for De-Anglicizing Ireland”).

*Evan already knows this: The night on which Yeats first heard of Swinburne’s death, he wrote in his journal, “Now I’m king of the cats.” Thanks to Jim Longenbach for that un.

****Perhaps not particularly surprising tidbit of the day: Ezra Pound was a bad dancer (according to H.D., in her memoir of Pound called “End to Torment”).**** 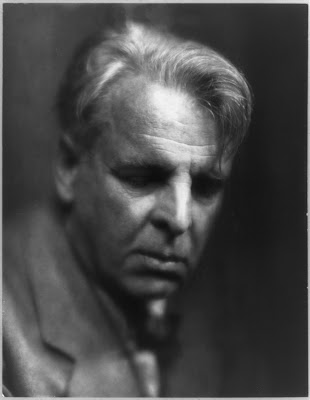 I figured I would begin with Yeats, since there are reputedly worse places to start in order to understand this whole Modernism schmegegge. Plus, he has the added bonus of being a major, major writer whose work I don't really know, other than a few isolated greatest hits. (As a matter of fact, I think I've avoided reading him until I had the opportunity to do something like this. Do either of you ever do that — save up authors you know you'll like, or that you know are important, until you can really focus in and give them your full attention? Stanley Cavell supposedly did this with Heidegger, waiting to read him until he was in his forties or something.)

And what do you know: the kid's pretty good! So far I am up through "Responsibilities" (published 1914) which I take it is kind of the middle of the middle phase. One thing that's been interesting is the sort of "a-ha" effect of recognizing Yeats' influence retrospectively on poets whose oeuvres I know quite a bit better: not just the obvious ones, like Pound and Eliot and Auden, but even people like Marianne Moore and Kenneth Koch, whose late poems especially are, I now realize, very Yeatsian underneath the surface craziness and Francophilia.

Anyway, I'll just note a couple of general features that strike me as I read, one thematic and one formal, possibly to be elaborated on further later:

1. Yeats' obsession with age — starting from very early on; there are poems from the perspectives of old men written when he was still very young, a habit he clearly passed on to Eliot. This is kind of a stock affectation among the Modernists for a while — I guess as a way of counteracting the youth-cult of Romanticism? Or am I missing some more obvious literary precursor to the tradition of voluntary senility?

2. His increasing, very admirable lack of fear about repeating words in poems. One of my favorite examples so far is from "The Secret Rose":

"… A woman of so shining loveliness
That men threshed corn at midnight by a tress,
A little stolen tress."

This is sort of a ballad-like device, but here it's not used as a refrain, nor is it exactly conversational: it's more like WBY was so pleased with the word he just wanted to use it again, immediately. Even better, perhaps, is this from "The Hour Before Dawn":

" … And he
Had dipped the wooden ladle deep
Into the sleeper's tub of beer
Had not the sleeper started up.

'Before you have dipped it in the beer
I dragged from Groban's mountain-top
I'll have assurance that you are able
To value beer; no half-legged fool
Shall dip his nose into my ladle
Merely for stumbling on this hole
In the bad hour before the dawn.'

To me this has a kind of mock-epic, even mythological, effect: "the beer" gaining, through repetition, something of the force of a Homeric epithet. But it also gives the impression of an extreme carefulness, like he isn't taking any chances and is deliberately restricting the range of his diction in order to get the rhythm absolutely perfect, beautiful, lifelike and metrical all at once. Which he does.

These are, quite possibly, two of the most obvious and stupid qualities of Yeats' poetry, but you've got to start somewhere, right? I don't know. What poems should I look out for?
Posted by Evan at 6:34 PM

So, I found my first cool nugget in the process of looking up stuff about Robert Coover's Public Burning (1977), which for those who haven't read it (and i'm only 50 pages in) is about the Rosenburg trials and features Uncle Sam as a wild west/Captain America who takes out The Phantom aka Communism. And Nixon is the other main character.


Anyways, bad summary...see wikipedia for a better one. But, the prose is beautiful and amazing and hyperbolic and everything good and clever and inventive about postmodernism.

So in doing research about the book, I found this interview with Coover:

"By the time 1972 rolled around, what I had was a substantial piece of a novel--and a lot of research still left to do. I was running out of money, so I accepted a visiting teaching job at Princeton for a year; I also had a play, "The Kid," premiering in New York at the time, and I wanted to be back for that. The Princeton libraries were good sources for the kind of research I was doing, but that research now seemed endless, and the prospects of extricating myself from it in any kind of timely fashion grew more and more remote. I also did a bit of traveling. To get the settings right, as you might say."

So this totally subversive book was written write in our own literary playground. Huzzah!
Posted by Adrienne at 11:03 PM