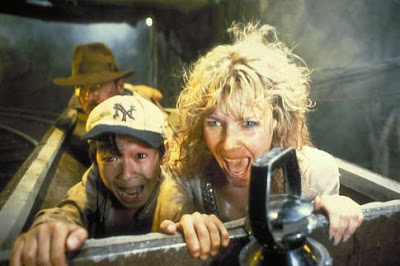 This is from Franco Moretti's article "Planet Hollywood," about the global diffusion of film genres. He's trying to explain the fact that, in the US, one in four box-office hits are children's films:

"'Children's films' is a sloppy definition, of course: it points to the audience, not the film — and to an audience which is moreover quite problematic. Children, after all, don't usually go to the movies by themselves and, as adults must take them, a little generic paradox ensues: whom should the film be for — the adult, or the child? Faced with this problem, the fifties offered either straightforward fairy tales (for the child: Cinderella, Snow White, even Fantasia), or those Jules Verne novels I mentioned earlier (which were much more successful than the fairy tales: another sign of a market directed at the adult). But today the two forms have converged, blending into a hybrid which appeals to children and adults alike: E.T., Roger Rabbit, Back to the Future, the various Star Wars and Indiana Jones — these are stories designed for a new human species of savvy children and silly grown-ups (Homo puerilis). Their god is Steven Spielberg (and Benigni is his prophet: Life is Beautiful — what a childish adult wants a child to know about Auschwitz.).

"In one film after another (Jaws, Close Encounters, Indiana Jones and the Temple of Doom, Jurassic Park; even the uncanny detail of the girl in red, in Schindler's List), Spielberg has not only chosen stories in which children and adults are somehow involved together, but where the ambiguities so typical of (adult) life are defused by the (child's) desire for polarization so well described by Bruno Bettelheim. The best example is Schindler himself; this Third Reich shark turned benefactor, who offered an incredible chance to study the contradictions of historical existence. But Spielberg is not interested in understanding complicated things, and in his hands this figure out of Dostoevsky, or Brecht becomes — nothing."
Posted by Evan at 11:03 AM

Let the narcissism of small differences begin!
Posted by Evan at 5:41 PM

"I was studying philosophy with a view to sitting the agrégation competitive examination … It was in this class that I first began to learn that every problem, whether serious or trifling, may be solved by the application of an always identical method, which consists in contrasting two traditional views of the question; the first is introduced by means of a justification on common-sense grounds, then the justification is destroyed with the help of the second view; finally, both are dismissed as being equally inadequate, thanks to a third view which reveals the incomplete character of the first two; these are now reduced by verbal artifice to complementary aspects of one and the same reality: form and subject-matter, container and content, being and appearance, continuity and discontinuity, essence and existence, etc. Such an exercise soon becomes purely verbal, depending, as it does, on a certain skill in punning, which replaces thought: assonance, similarity in sound and ambiguity gradually come to form the basis of those brilliantly ingenious intellectual shifts which are thought to be the sign of sound philosophizing.

"Five years of study at the Sorbonne boiled down to acquiring skill in this form of mental gymnastics, the dangers of which are nevertheless obvious. In the first place, the technique by which intellectual balance is maintained is so simple that it can be applied in the case of any problem … I was confident that, at ten minutes' notice, I could knock together an hour's lecture with a sound dialectical framework, on the respective superiority of buses and trams. Not only does this method provide a key to open any lock; it also leads one to suppose that the rich possibilities of thought can be reduced to a single, always identical pattern, at the cost of a few rudimentary adjustments. It is rather as if music could be reduced to a single melody, once the musician has realized that his melody can be read either in the treble or the bass clef. In this sense, our philosophical training exercised the intelligence but had a dessicating effect on the mind. …

"After years of this training, I now find myself intimately convinced of a few unsophisticated beliefs, not very different from those I held at the age of fifteen. Perhaps I see more clearly the inadequacy of these intellectual tools; at least they have an instrumental value which makes them suitable for the service I require of them. I am in no danger of being deceived by their internal complexity, nor of losing sight of their practical purpose through becoming absorbed in the contemplation of their wonderful elaborateness."

An important recent event in my life has been the discovery (via Douglas Wolk) of a complete archive of Bob Dylan's Theme Time Radio Hour. As its title would suggest, each episode is devoted to a single lyrical theme (weather, drinking, baseball, sleep, shoes, birds, New York, etc.) The song choices, mostly from the 50s and 60s, are pretty eclectic and uniformly great. But the nicest surprise is that Dylan's a terrific DJ: warm, informative, charming and passionate, with the added advantage of being, you know, Bob Dylan. And even though I gather, from the credits at the end of each show, that he has a team of producers and researchers coming up with the perfect little factoids he strews about every which way, it's hard not to give in to the Greil Marcusian fantasy that it's all coming straight out of the great man's Old Weird American Subconscious. I especially like the way he intones phrases from a song he's just played, thus (a) making them sound like Bob Dylan lyrics and (b) instantaneously converting them into Dylanological cross-references for the remainder of recorded history.

Anyway, just to give you a little taste, here's the opening to the "Flowers" show: