"Littlefield leaned closer to him. 'You're a young man, you can still learn. Pay attention to this. You can steal in this country, you can rape and murder, you can bribe public officials, you can pollute the morals of the young, you can burn your place of business down for the insurance money, you can do almost anything you want, and if you act with just a little caution and common sense you'll never even be indicted. But if you don't pay your income tax, Grofield, you will go to jail.'"

"So his novels lead double lives, in which the sophistication of his ideas is constantly overwhelming the rather primitive narrative and stylistic machinery; the reader has to learn to switch voltages, like a busy international traveller."

Danger in the Past 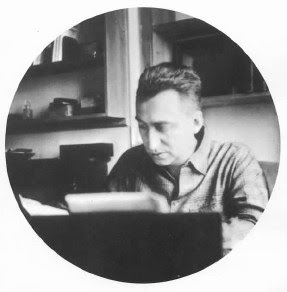 “When a word like dangerous is applied to ideas, language or art, it immediately signals a desire to return to the past. It means that the speaker is fearful … the speaker fears all innovation, which he denounces on each occasion as ‘empty’ (in general that is all that can be found to be said about what is new). However this traditional fear is complicated today by the contrary fear of appearing anachronistic; suspicion towards the new is combined with a few nods in the direction of ‘the call of the present’ or the necessity to ‘rethink the problems of criticism’; ‘the vain return to the past’ is dismissed with a fine oratorical gesture. Regressiveness appears shameful today, just like capitalism. Whence come remarkable jerks and abrupt halts: there is a pretence for a while of accepting modern works, which one ought to discuss since they are being discussed; then, suddenly, a sort of limit having been reached, people proceed to a joint execution. These trials, set up periodically by closed groups, are thus in no way extraordinary; they happen at the end of certain disturbances of equilibrium. But why, today, Criticism?”

"Once you know the answer you can see that the cross-word puzzle was set quite fairly. But why should we be given a guessing game at all — why can't he tell us? The mood seems to be that of a professional man who must guard the interests of his client, and only one word is his client at a time."

— William Empson, "Dictionaries" in The Structure of Complex Words, 405
Posted by Evan at 12:44 PM 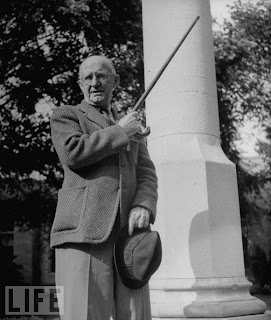 "Some of those who had known Christian in his great days as a teacher were sorry, after the war, to see him becoming involved in the administrative side of the University. I remember his saying to me one day, in the early stages of this, 'I've just sent off a lot of letters, and I said to myself as I mailed them, "There are seventeen letters to people who don't interest me in the least."' But the job of the dean's office did interest him — though it seemed to us that it did not take a Gauss to rule on remiss or refractory students. He had never liked repeating routine, and I suppose that his department was coming to bore him. He made, by all accounts, a remarkable dean — for his card-catalogue memory kept all names and faces on file, even for decades after the students had left; and the sensitive feeling for character that had been hidden behind his classroom mask must have equipped him with a special tact in dealing with difficult cases. His genius for moral values had also a new field now in which it could exercise itself in an immediate and practical way, and the responsibilities of his office — especially in the years just after the war, when students were committing suicide and getting into all sorts of messes — sometimes put upon him an obvious strain. Looking back, since his death, it has seemed to me that the Gauss who was dean of Princeton must have differed almost as much from the Gauss with whom I read French and Italian, as this austere teacher had from the young correspondent in Paris who had paid for Oscar Wilde's drinks. The Gauss I had known in my student days, with his pale cheeks and shuttered gaze, his old raincoat and soft flat hat, and a shabby, mongrel dog named Baudelaire which had been left with him by the Jesse Lynch Williamses and which sometimes accompanied him into class — the Gauss who would pass you on the campus without speaking, unless you attracted his attention, in an abstraction like that of Dante in Hell, and who seemed to meet the academic world with a slightly constrained self-consciousness at not having much in common with it — this figure warmed up and filled out, became recognizably Princetonian in his neckties and shirts and a touch of that tone which combines a country club self-assurance with a boyish country-town homeliness. He now met the college world, unscreened, with his humorous and lucid green eyes. He wore golf stockings and even played golf. He interested himself in the football team and made speeches at alumni banquets. Though I know that his influence as a dean was exerted in favor of scholarships, higher admission requirements, and the salvaging of the Humanities — I cannot do justice here to this whole important phase of his career — the only moments of our long friendship when I was ever at all out of sympathy with him occurred during these years of officialdom, for I felt that he had picked up, a little, the conventional local prejudices when I found him protesting against the advent in Princeton of the Institute for Advanced Study or, on one occasion, censoring Lit for publishing a 'blasphemous' story. One was always impressed, however, by the comprehensive and lucid way in which he seemed to have absorbed the business of the University." 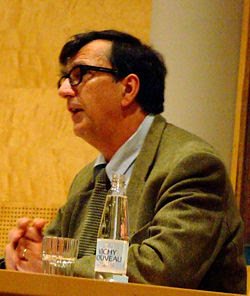 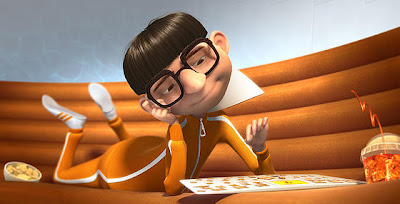 The Protestant Ethic and the Spirit of Filesharing 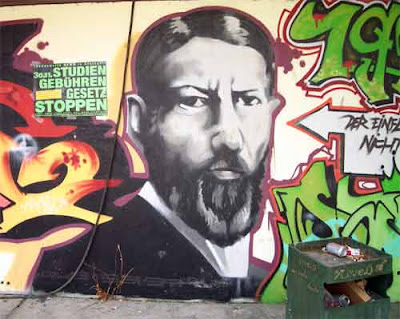 "Without examining all the directions in which Puritanism exercised influence, let us just recall that the degree of toleration afforded to pleasure in cultural products serving purely aesthetic or sporting indulgence was limited by one characteristic factor: they must not cost anything. Man was merely the steward of the gifts granted him by God's grace; he, like the wicked servant in the Bible, must give an account of every penny, and it is at the very least dubious whether he should expend any of this money for a purpose which serves not God's glory, but his own pleasure. Which of us with eyes to see has not met people of this persuasion right up to our own time? The idea of the obligation of man to the possessions entrusted to him, to which he subordinates himself as servant and steward or even as 'moneymaking machine,' lies on life with its chill weight."

— Max Weber, The Protestant Ethic and the "Spirit" of Capitalism, trans. Peter Baehr and Gordon C. Wells, 115
Posted by Evan at 4:17 PM