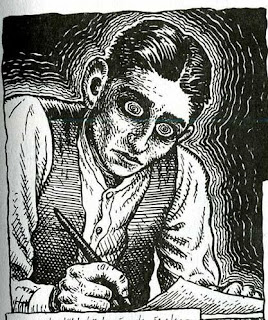 Carl Wilson on Kafka's Office Writings.
Posted by Evan at 9:11 AM

If you're looking for a simultaneously perverse, hilarious, depressing, experimental and formally elegant contemporary poet — and I don't know why you would be, because I don't know why you'd think you'd ever find one — let me recommend Linh Dinh to you. I just finished his 2007 collection Jam Alerts, which I've had for a while but just got around to reading. He has a bit of that Language poetry/flarf compulsion to hit you with the grodiest possible diction ("barf," "fizzin'," "jizz," "hump") without abandoning the high ground of academic mastery (sonnets, quatrains, iambic pentameter, fancy enjambments). But he has a much sharper controlling critical intelligence: his poems are pointed and disturbing in a way that nothing I've read by Bernstein et al. have been. Actually the poet he reminds me of most (not so much formally, but in spirit) is mid-period William Carlos Williams, the observational Williams of An Early Martyr, "the anarchy of poverty / delights me" and so forth. They have a similar transgressive sweetness, an unsentimental attraction to human grossness, coupled with a strong radical streak. In Linh's case, the anarchy that delights him is Internet porn, Iraq war statistics, text message syntax, sex tourism come-ons, broken English, plain narcissistic loneliness. It's often not clear whether his use of this stuff is satirical or lyrical: sometimes he's mocking or despairing about American culture or politics or language, but much of the time he's just swimming around in it. Plus his verse really moves; he can really pull off the traditional meters and stanza forms, without being too showy about it.

I'll hold off on more substantial criticism, because this has nothing to do with anything I'm supposed to be doing, but here are two fairly representative poems:

162 bullshit happenings a year. First thing each morning,
I must check out the bullshit reckonings, even before I had
A chance to shoot, shower and shave. I can't start my day
Without knowing what happened last night, what went down.
I'm a team player, don't you understand? It's not about me.
If my bullshit logo won, then I'm vindicated — I'm half alive,
Sort of, for a minute or two, tops. If it lost, I'm nothing.

Sometimes I forget that this world came
From fresh herring, that these people came
From solid herring stock. Lovely Bianca Black

Will soon be wedded to one Chien Meow, I see
Very clearly now how herring has brought us all
Together, under the lych gate, waiting, as always

For the damn priest to tuck away his sin, before
He lowers us, one by one, into the bog, minus
Our blameless nuts and titties.

The Future of Everything 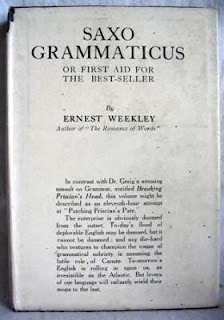 Hi from Ithaca everybody. I just got finished reading Robert Graves' weird little volume Lars Porsena, or the Future of Swearing and Improper Language (1927) and for some reason felt like I had to copy out the advertisement in the back of the book for others in the same series. I really need to get somebody with a posh BBC accent to read the following aloud in its entirety:

This series of books, by some of the most distinguished English thinkers, scientists, philosophers, doctors, critics, and artits, was at once recognized as a noteworthy event. Written from various points of view, one book frequently opposing the argument of another, they provide the reader with a stimulating survey of the most modern thought in many departments of life. Several volumes are devoted to the future trend of Civilization, conceived as a whole; while others deal with particular provinces. It is interesting to see in these neat little volumes, issued at a low price, the revival of a form of literature, the Pamphlet, which has been in disuse for many years.

Metaphor of the Week

“The structure of The Waste Land is, in a sense, a negative structure. If a large family, kept together unwillingly in the same house by economic and social reasons, but not by any ties of true affection, could be caught at a moment of disintegration — not necessarily all in the same room together, nor even particularly conscious of each other’s activities — all making claims and each refusing to meet the other’s claims, then the intricate disharmonies of that house, the subtle cross-references of conflict, would give it an individuality as strong as that of a house where everyone was positively at peace.”

My review of the very, very excellent Lola Montès is up now at Notcoming.
Posted by Evan at 6:02 PM

With all this talk about "Wall Street" versus "Main Street"...

what about Elm Street? 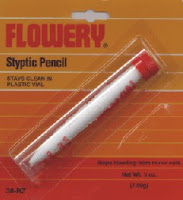 A hallmark of David Foster Wallace's style: the transposed cliché. He takes some phrase or figure that is popular or automatic in American parlance and either (1) transfers it to another semantic domain or (2) synonymizes it, so that it takes on a new specificity or emphasis.

One example for now, from the Rolling Stone profile of John McCain, already cited by Douglas Wolk:

when one of the Twelve Monkeys interrupts to ask whether it'd be fair to characterize this new ad as Negative Murphy gives him a long styptic look and spells "r-e-s-p-o-n-s-e" out very slowly.

"A long styptic look": what this means is clear from the context (a nasty, dismissive, deflating kind of look) but Wallace adds some zest to it with the word "styptic," as in styptic pencil, meaning "contracting the tissues or blood vessels; astringent." Wolk describes this as a "perfect word that comes out of nowhere," but in fact I think it's fairly easy to guess where it came from. One imagines this phrase might have started life as "a long withering look," only to be rejected by Wallace as being too stock. But rather than change the basic meaning, he gets out the (mental?) thesaurus to find a more energetic, recondite word to express a conventional meaning. Hence "styptic," which adds some unpleasant clinical associations but basically maintains the original sense, just boosting it up into a higher register.

I don't mean this necessarily as a criticism of Wallace, that he merely substitutes high-status verbiage ("uptown words," as he puts it somewhere) for basically homely sentiments — although I think the criticism could be made. But I think it's a procedure intrinsic to his writing, and in a serious analysis of him there would be worse places to start.

More examples to follow, when I get around to reading Wallace again.
Posted by Evan at 9:26 AM 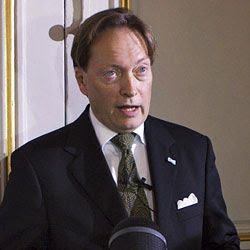 First the economy falls apart, then we get hated on by Swedish aesthetes. Man!

P.S. I'd love to hear what Jim English and Pascale Casanova think of this.
Posted by Evan at 7:35 PM